Today 76 years ago – on the night of the 19th of April in 1943 – Viviane escaped in the womb of her pregnant mother from the Twentieth Train heading for Auschwitz.
Isabella Weinreb-Castegnier was three-months pregnant when she jumped that night in Belgium from the fast moving 20th Death Train to Auschwitz.
It was Passover eve and full moon , just like today.

Isabella escaped with a broken wrist and bruises all over her body, but no other major injuries.
Her daughter Viviane – meaning “full of life”, and named so for her will to live and hold tight in her mother’s womb – was born six months later on October 30, 1943 in Brussels, Belgium.

This e-booklet presents Viviane’s story with amazing new insights discovered together with the Dutch-Belgian author-reporter Simone Korkus of the man that helped Isabella jump to freedom – Elias Gnazik.
Published today April 19, 2019 by Miracles.Media (miracles.media) together with co-publisher Richard Bloom Productions.
With a foreword by Simone Korkus.

As of April 19, 2019 you can download the ebook from the site Miracles.Media . Visit Miracles.Media once in a while to check for any updates. A reprint followed by a 2nd edition (also with distribution via Apple Books) are scheduled in 2022.

Here is the link to the download at the Miracles.Media page Viviane’s Story 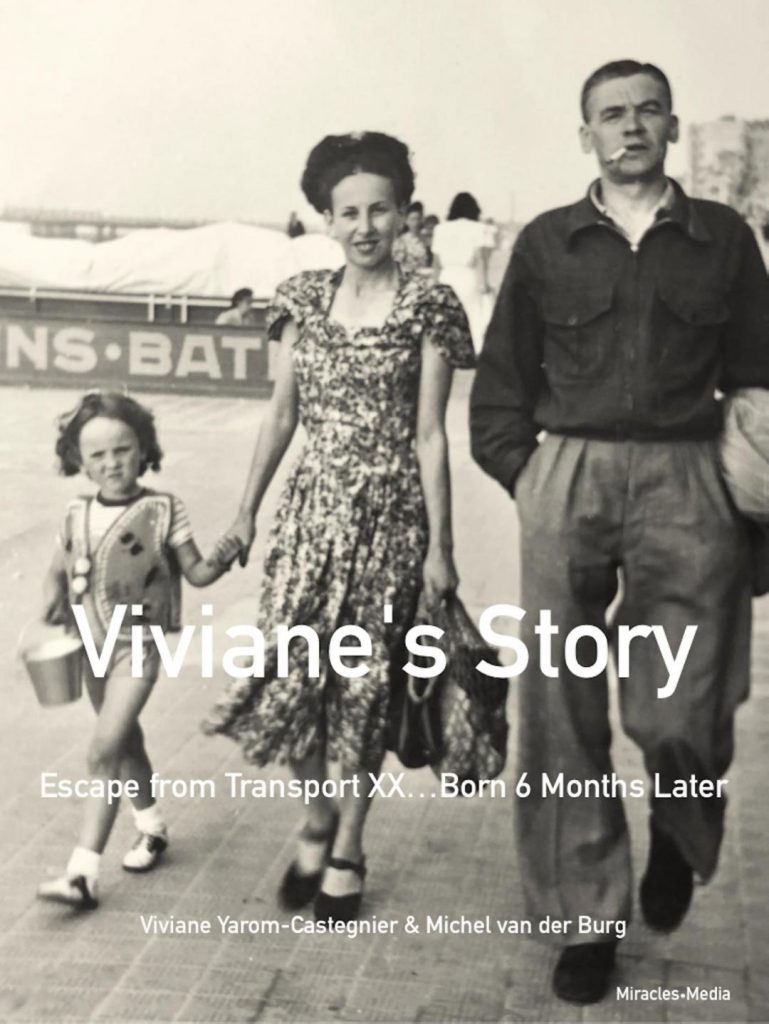 Isabella Weinreb Castegnier was three-months pregnant that night on April 1943 in Belgium, when she jumped from the fast moving 20th Train heading for Auschwitz. Isabella escaped with a broken wrist and bruises all over her body, but otherwise without major injuries. Her daughter Viviane – meaning “full of life”, and named so for her will to live and hold tight in her mother’s womb – was born six months later on October 30, 1943.

Last month, Viviane first learned about our documentary “Transport XX to Auschwitz” and e-mailed me…”I couldn’t believe while searching online that I would find an actual movie made, telling the story of this famous, unique escape from a death-train!” After watching the documentary, she wrote to me “it was so well-made…I even wished it were longer”…Viviane also shared with me that at one point in the film, she got tears in her eyes, as her mother’s face appeared in a flash on the screen, while Lilly (Wolkenfeld Schwartz) – her mother’s friend was telling the story…”and Bella jumped” … this was so unexpected, she said “it took me by surprise!”

Today, 71 years after that unique escape, on Holocaust Remembrance Day 2014, and her mother’s yahrzeit, Viviane shares her story below.

Escape from Transport XX – to be born 6 months later

My mother – Isabella Weinreb Castegnier, became the No. 1153 on this day in 1943 when she was herded on a truck with Jews, Gypsies, and other criminals or “unwanted” according to Nazis’ doctrine. The truck was heading to the Kazerne Dossin in Mechelen – the transit camp the Germans used for direct transports from Belgium to Auschwitz. Upon arrival, prisoners were deprived of their identiy and all personal belongings. They were assigned tags with numbers to wear on their neck. For the Nazis they were not humans… just a crowd of cattle to be slaughtered.

My mother was hopeless, she was pregnant and aware that in her condition there was not much chance for her survival, she knew she was doomed…unless she could escape from the death train! And indeed, she would do that on this fateful night of April 19, 1943 when she jumped off the cattle-train heading to Auschwitz. She survived…and I was born six months later!

My mother was born in Frankfurt-am-Main on November 2, 1919. Her parents were Jews from Poland. They immigrated to Germany during WWI. Some of their family members would later move to Belgium and Holland. My mother and her parents left Frankfurt at the start of 1937 as it became unsafe for Jews to stay in Germany.

My mother, her parents and her sister moved to Antwerp where their relatives resided. My mother was then 16 year old. She joined the ‘Betar’ – a Jewish Zionist Youth organization, in the hopes that one day she would immigrate with her group to Palestine…a dream which would not materialize.

My mother and her family stayed in Antwerp until the German’s invasion of Belgium in May 1940. By the end of that year they were transferred with other Jewish families to rural areas in the province of Limburg. In the middle of 1941, the Jews who had been expelled earlier to Limburg were now forced to relocate again to cities designated by the Germans. My mother and her father settled in Brussels, while her mother and sister went to the city of Liege, where they had found employment in a convent under the protection of the Catholic Church. My mother became a sales representative for pharmaceutical-dental products. Subsequently she would meet my father who was a dentist, also in Brussels.

In January 1943 – my grandfather, Leo (Leib) Yehuda Weinreb, was arrested in Brussels and deported to Auschwitz on a transport from Mechelen. Around that time, at the beginning of 1943, my parents decided to get married. My mother never thought of going into hiding, she believed that she would be safe with my father – a Belgian citizen, not Jewish, with Catholic roots.

My parents were arrested on their wedding day, and with them, the entire wedding party was booked for inquiry, including the officials who had performed the ceremony. Most likely an informer had denounced them to the German police. My parents were not aware of the German laws regarding “mixed/Jewish marriages.”…They imprisoned my father in the notorious Gestapo headquarters at Avenue Louise in Brussels and punished him for marrying a Jew. While he was beaten in their cells, my mother was transferred to the Kazerne Dossin in Mechelen, in order to be deported later. Luckily for my father, he would be released from jail after a short time, thanks to a family friend who had affiliations with the German administration.

Isabella became a number…no.1153, bound to be deported on the 20th Transport to the death camp of Auschwitz. But she was determined not to get there, she knew she had to escape, it was her only chance. Shortly after her arrival in Dossin, my father’s family had submitted a request for her release, on the grounds that she was pregnant and married to a Belgian citizen from a Catholic family. They knew a few people of influence in the German government who could intervene, but unfortunately, their petition failed. My mother was summoned to the camp’s commander who stated gleefully: “Your husband was a fool to think that I would ever release a pregnant Jewess, and be assured that you and your offspring, you both will be exterminated!”

As she was reminded once again of her dreadful upcoming fate, my mother decided it was time to join other detainees who had also plans of jumping off the train. With her friend Lilly she started to organize jumping drills. She and Lilly were training women who were afraid, by teaching them to jump from the highest bunk beds, so that they could be prepared when they would have to escape from a moving train. There were also children who took part in those exercises. One of them was Simon Gronowski, a brave 11-year old boy, whom they called “le petit Simon” (little Simon) and who was practicing jumps with other kids.

Escape from Transport XX – the death train to Auschwitz…

On April 19, 1943, the first night of Passover, Transport XX departed from the barracks in Mechelen with people crammed in cattle-wagons. This time the Germans didn’t use the passengers’ wagons as in previous transports, but instead, they opted for wooden box-cars with tiny ventilations and doors reinforced with barbed wire, which would prevent all attempts to escape. The transport left Mechelen in the late evening for its destination, when at one point, it started stalling, then suddenly stopped. My mother would say that she could hear shouts in German and shots coming from the area of the locomotive. It sounded like the train had come under attack.

My mother (no.1153) and her friend Lilly (no.1152) were both huddled in the same wagon. They were planning to jump off the train as soon as possible, before it would reach over the border to Germany. Each wagon was equipped with a bucket and a broom, the Germans always caring for cleanliness. Possibly the broom had been used to open the door, or perhaps a sharp tool that some people had managed to hide and carry from the camp. My mother could not remember clearly how they had succeeded in making that door open, from inside or outside? She wasn’t sure. But she did tell another story about the broom…how they had dressed it up with a man’s coat and a hat, then held outside the door to use as a decoy for the soldiers who were guarding the train. They were expecting the German guards to shoot at that “broom”… but if the Germans were not responding, it would be the signal that it was safe for them to jump.

People in her wagon then began to jump…taking turns… my mother too was getting ready…but when came her turn, she froze, overcome by a sudden fear, it was dark and the train started to pick up speed. While she was trying to regain control of herself, she felt someone pushing her from behind…and finally she got the courage to jump. Bullets were flying around but didn’t hit her. She rolled down the ravine, then run to hide in the nearby bushes. She had a broken wrist, bruises over her face and legs, but no major injuries. It was amazing that she had not miscarried from that fall and remained pregnant…I was holding tight in my mother’s womb!

The next morning, when it was safe to move out of her hiding spot in the woods, my mother went to the nearest tram station to catch the trolley to Brussels and reunite with my father. Then came the Gestapo again!…they were searching the tram for escapees. She was terrified! She was hiding her swollen hand in the pocket of her coat, afraid they would ask her to take it out. Luckily the men passed her by and did not pay attention. She finally arrived to the tram station in Brussels, feeling so weak and hungry that the first thing she did was to find a bakery and eat her favorite pastries…(she always had a sweet tooth!) Then she allowed herself to call my father who could not believe she had escaped and returned home…he thought he was seeing a ghost!

Couple months later, about three weeks before I was born, the police came to my father’s house to look for “Isabella Weinreb who had escaped”…My mother had already a new identity, therefore my father pretended she was “not the same wife, but a new one, since the other one he thought had died”…a story the policeman did not believe, but since this man was not a German, just a Belgian cop who was in a good disposition toward my father, he decided to do no harm, just said “you are lucky that my colleague didn’t come with me today, because he is a Gestapo officer and he would have taken this woman away.”

Couple weeks after this frightful event, my mother gave birth safely at home…six months after her escape, on October 30, 1943…my father named me Viviane, meaning “full of life”!